As each web server administrator or database administrator (DBA) will tell you, in the course of their daily work they are often faced with simple repetitive tasks, such as making backups or sending email messages to users. And just like the "scheduled tasks" function in a Windows environment, a Linux machine has its solution for making the administrator's life much easier – cron jobs. And when website management became a task no longer exclusive for experienced administrators, cron jobs were made available to a wider public.

A cron job is a program for scheduling certain tasks to be automatically executed at a pre-defined time/date. With any of the web hosting plans offered by NTC Hosting you get a Crontab Manager enabled to periodically perform any action of your choice.

A cron job ('cron' is short for 'chronograph') is an automatic daemon process, which is run continuously in the background, allowing for certain commands or groups of commands (scripts) to be performed at certain intervals. Cron jobs can be used for anything from system admin commands, such as running a backup script, to simple daily actions, such as sending e-mail notifications each morning. Another popular cron term is 'crontab', short for 'cron table', representing the file, which contains a list of all specified cron jobs.

With the user-friendly Crontab Manager tool integrated into the Web Hosting Control Panel offered by NTC Hosting you can schedule any desired tasks in seconds. Simply specify the command or script that should be executed, the exact time interval when it should be done, as well as the e-mail address to which reports for the performed action will be sent and you are ready. 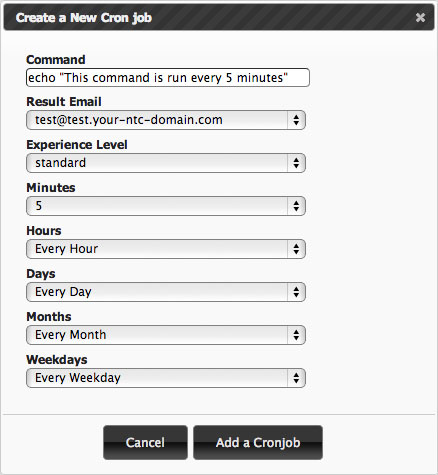 Cron Jobs are available with all of our web hosting plans and if you need more than what your plan currently offers, you can always purchase an additional cron jobs upgrade or move to one of our more elaborate plans, offering more features.

When Cron Jobs were first introduced, they were managed exclusively via the server's command line. With time, more and more people felt the need to create cron jobs, but giving SSH access to the server in order to manage the crons was not something that many hosting companies will offer, since there is a chance that it will compromise the server's security. This is why the cron management was incorporated into the hosting control panels, making it accessible to the regular user.

With NTC Hosting, the user has a choice between the general cron job management, which represents a user-friendly menu with drop-down selections, which specify when the cron will be run. And for the users, who are used to dealing with the command line management of crons, there is also an advanced, Unix style mode of cron job management.